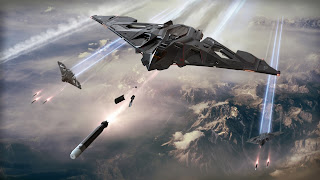 You know what we haven't chatted about in a while? Star Citizen. The crowdfunding game that continues to raise ridiculous amounts of money and has been in development for about 10 years. So long has it been sitting in development that it is still in the Alpha stage. But there has been an update from the development team with a letter from the chairman dated 12/23/20, alongside a tweak to the roadmap that removed any mention of Squadron 42.

In February of 2016, a single-player campaign spun off from Star Citizen. Squadron 42 is set in the same universe as the MMO and boasted quite a list of actors. Originally the two were bundled together until the developer realized "hey, we can make more money by selling these separately." Those whom already bought into Star Citizen can get the single-player game for an additional $15.

Why was the update in the roadmap important? With about a decade of development under it's belt, Star Citizen still being in an Alpha state is a cause for concern. After many revisions, Squadron 42 was expected to be out in Beta in the third quarter of 2020. Now it's been removed from the roadmap entirely.

According to founder, CEO, chairman Chris Roberts "Squadron 42 will be done when it is done, and will not be released just to make a date[.]" Therefore, no roadmap. Given the game development culture of crunch time and releasing sub-par content, that is an admirable position to take. They want to release a game when they feel it's done. Great.
If someone were a backer of the project from way back in 2012, not seeing any new information would be a kick in the pants. When one pays money for a product, they expect to see something in return. Work in progress is better than nothing at all. And with 8 years having passed, many of the backers have moved on to new phases of their lives - starting careers, families, etc. While Star Citizen sits in Alpha still.
Let it be known that those supporting Star Citizen and Squadron 42 are incredibly patient people. They are investing a lot of time and money to help this project succeed. The developer has raised over $300 million in crowdfunding and selling digital ships. This may be one of the most expensive video games in development. But given the lack of visual proof that Squadron 42 is still under production, and a seemingly never-endling Alpha, some supporters are getting miffed. There are a handful of individuals asking for the games to be done now, but the majority only want to see progress to know that their money is being spent appropriately.
It's a delicate situation to approach. At this point, it would not be a surprise if both titles are not released in full for another 3-10 years - and hopefully at the benefit of not overworking the staff to deliver on the promises made to backers. On the other side of the coin, people whom supported this game want to see content being developed. They need more than words and empty promises.
At what point does the developer have to start pushing content out instantly before they face a bevy of lawsuits?
Email Post
Labels: crunch crunch time crunchtime roadmap squadron 42 delayed star citizen star citizen delayed beta video game crunch