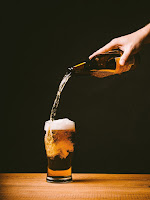 It's that time! The Game Awards are upon us. Which means my TGA Drinking Game is here to cause controlled mayhem.

I began this in 2015 after an overabundance of the words "World Premiere" and cheesy mascot costumes. How could one not be driven to drink after that insanity?

This has been updated over the years to accommodate the changing climate of The Game Awards. Specifically mentions of Hideo Kojima (whom is best buds with show creator Geoff Keighley) and anything Canada spurred the changes! Also to save one's liver. If anyone took a shot of liquor with every "World Premiere" they would be in the hospital for alcohol poisoning.

- 1 chaser of water - When someone says or a title card flashes the words "World Premiere."
- 1 shot drink of choice - Every time Geoff Keighley talks about himself, his relationship with Hideo Kojima, or his vision for The Game Awards.
- 1 shot - When someone says 'Awesome' or 'Fantastic.'
- 1 shot - When there's a burn again Konami, Bethesda, or CD Projekt.
- 1 shot - For every advertising mascot paraded across the stage.
- 1 shot - Anytime The Last of Us 2 wins an award. We all need a drink to take away the brain cells to remind us of this.
- 1 beer - Whenever someone mentions that they are Canadian, or that a studio is from Canada. This includes Geoff Keighley.
- A full pint of your drink of choice - If there are no D-List Celebrities throughout the entire show.
Be safe and happy drinking!
Email Post
Labels: award show drinking game game awards Geoff Keighley kojima the game awards the game awards drinking game the last of us 2 video game awards world premier world premiere